Welp, I just got back from Heroes Con, and this year I decided to do something I always forget to do. Take pictures! That’s right kids! Not only did I remember to pull the camera out twice during the entire 3 day trip, I also remembered to push the button. Good for me, and super lucky for you (you can thank me later) so sit back loyal blog readers, for I am about to take you on a journey I like to call; Heroes Con 2008: A journey into the hearts and minds of today’s comic reading public! 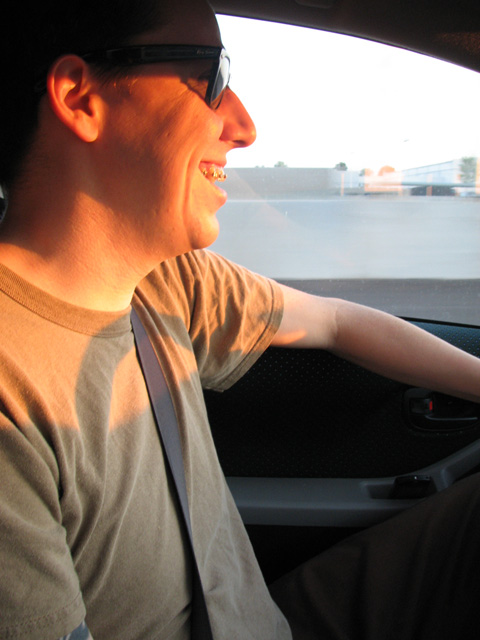 Okay here we are right out of Josh’s driveway. Bam! I catch Josh in mid steer. Look at that natural lighting. Josh says something like “I always look bad in pictures” So I then bravely turn the camera on myself. 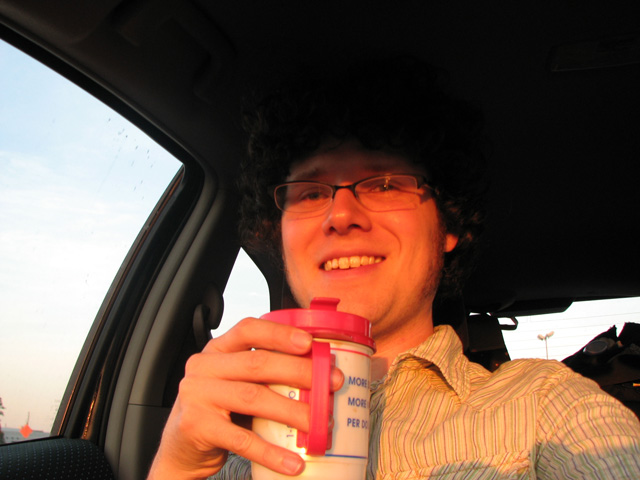 It’s just after 6 o’clock and we’re on our way to meet up with cartoon legend Patrick Dean at some waffle house off of 85. Of course we go to the wrong Waffle House. Just in case you didn’t know almost every highway exit in has two waffle houses, one on each side of the ramp. This happens to most Atlantans every so often, so it’s not too big of a deal, or is it?. Is this where our tale ends dear reader?! Could this be the end of Brad and Josh?! 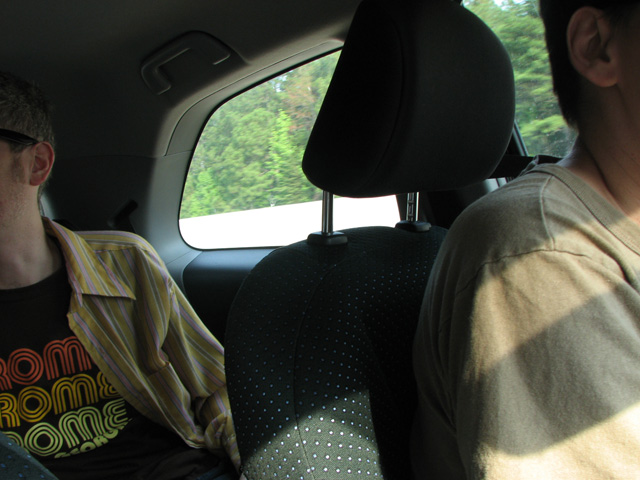 Balls no! Before you know it we’ve got Patrick dean in the car and we’re on well on our way to ! I and document this achievement with yet another photo. Look at this one. What a shot! It captures everything you need to know about life and cartooning. What’s that saying about pictures being worth a million thousand words? Well, if I were you I’d throw that crap saying away! This photo is worth at least double that! And that’s before you even take into account that these ears belong to Patrick dean (left) And Josh Latta (other one)

Okay at this point I forget to take pictures of the entire first day of the show. But whatever, There is always Saturday right? So Friday went alright. I had about two hours of sleep, and the con was a little sluggish (Friday’s are usually like that) but that’s fine. I don’t want a bunch of people around me begging for my wares while I’m flying at half mast anyway. So after the show on Friday Patrick, Josh and I all go back to our room and proceed to talk about comics and blow through 30 beers. Then we head down to lobby of the Hilton. Run into one of the world’s top notch peeps; Rob Ullman and his gang. Then we’re told that we can’t drink our cans of Bud Light in the hotel lobby, so we get all Avril Lavine on him and kindly throw them away. Which is fine cause we were on our way to the Westin anyway. So we go to the Westin. Drink some more booze. I get to sit at the bar with (seriously) two of my all time most favorite cartoonists ever; Even Dorkin and Xamie Hernandez! I don’t remember much about the conversation, but I do know that Evan Dorkin is really funny. Then we somehow end up sneaking into some krunk ass club that we had to get frisked twice to get into. Patrick and I made it through, but the door men were hip to our game by time Josh got through. So they nabbed us all and we had to leave. Lame.

I think we went home after that. Thanks to Patrick for reminding me about that night club thing because I had totally forgot. 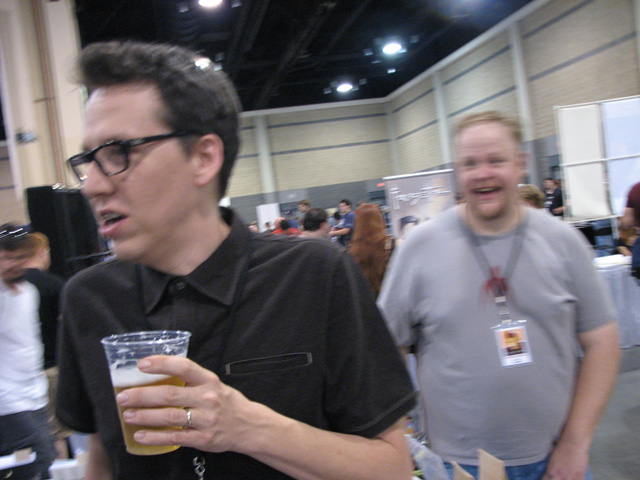 Saturday! Okay here’s where shit gets real. Josh and J Chris start boozing it up and I just bust out my camera and snap this million dolar baby. That’s Josh Front and center, and to his blurry left is J Chris “king of the mini comics” Campbell. That guy can’t stay still for a second. Jus look at this next pic for proof! 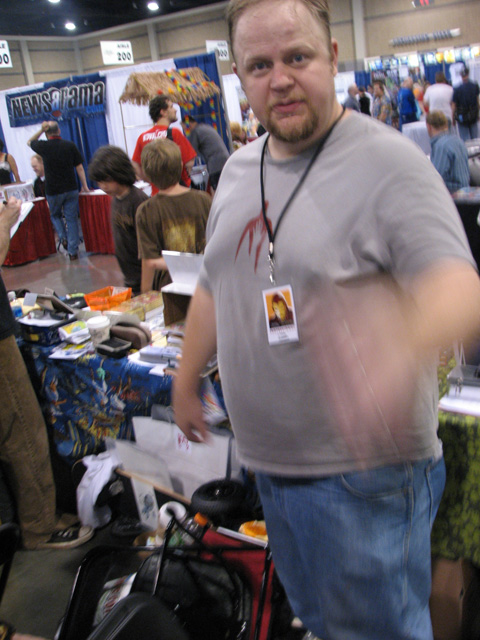 Jeez J Chris! I see you already, quit waving! I’m trying to take awesome photo’s here! Sheesh. So while I have my camera out. I decide to take a few more “shots” But who to take a picture of? Hmmm. Wait I got it! 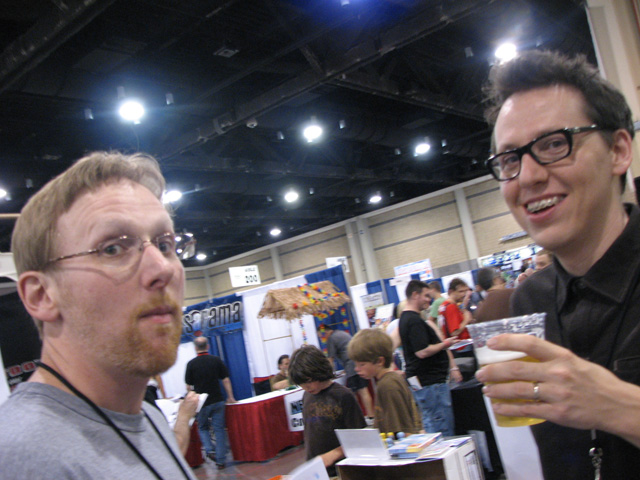 smith and Josh Latta! (next to Shannon) is an awesome mini comics reviewer and maker. He knows exactly what a good comic should have in it regardless if it’s main stream or a small press book. He just loves comics and it shows. So now that I’ve got my camera out this reminds , that he should get his camera out too, which leads us to this: 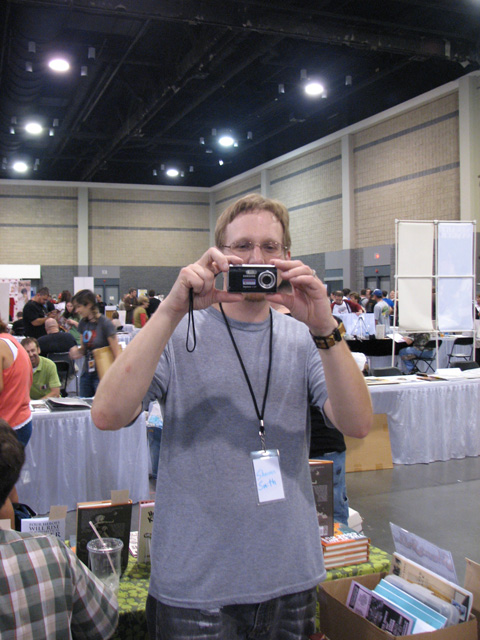 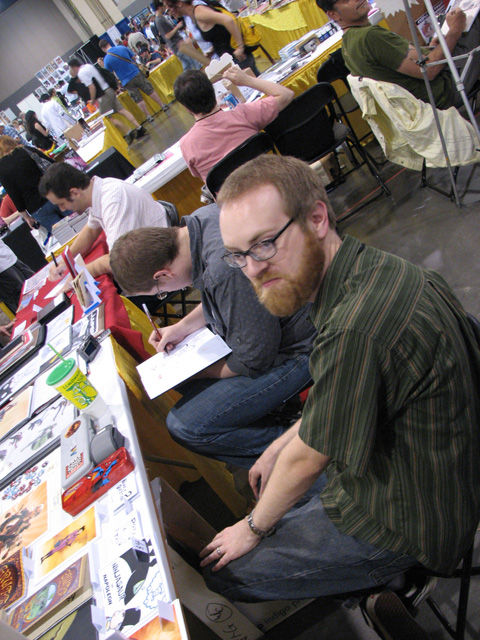 Why look what’s right here next to us! It’s Jason Horn and Dean Trippe. Dean is hard at work on a (no doubt) great looking sketch, which he produces constantly all day long with out effort. Someone told me he even does con sketches in his kitchen on Tuesday mornings. It just no big deal for him. Get there early though, the list fills up fast! Jason looks kind of grumpy in this photo which is great for me because he never looks like this, so it must be that I’m such a great photographer that I just pull the emotions right out my subjects. 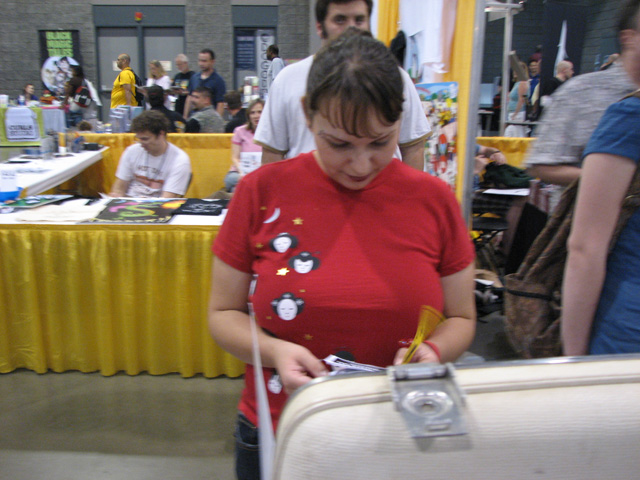 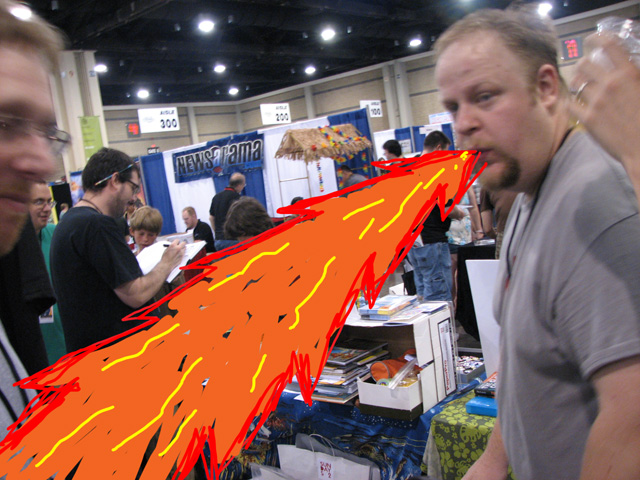 Then without a thought I spin around and catch J Chris blowing super realistic fire at a kinda blurry smith! Holy crap, I better do something to calm him down, before he does in again, but what? Then it hit me. 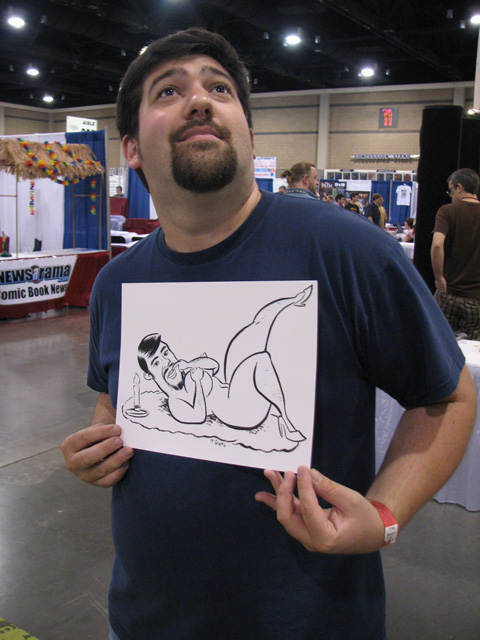 I’ll get Scott Ellingburg to pay me 5 bucks to draw him as a hot chick! I have a sign to do these sketches up every year, and every year one person takes me up on it. This year it was Scott. What a good sport! I bet his wife will love it. Heck I wouldn’t be surprised if they named their first child: Drawing of Scott as a hot chick. I guess I wouldn’t be surprised if they didn’t either.

Well that’s all the crappy pictures I took this year. I really meant to take a lot more pictures, but this is all I had in my camera when I got back Monday. I did a horrible job. And left my camera in the room most of the time. Oh well. If anyone is interested in a much more interesting and accurate account of the Heroes con experience then check out these links below.

Thanks again for everyone who came out and bought sketches and books from me. It means a lot to me. Mad Props must be issued to Dustin Harbin, for throwing the whole indie island together. It was a great time, and the guests definitely made this year a great success. 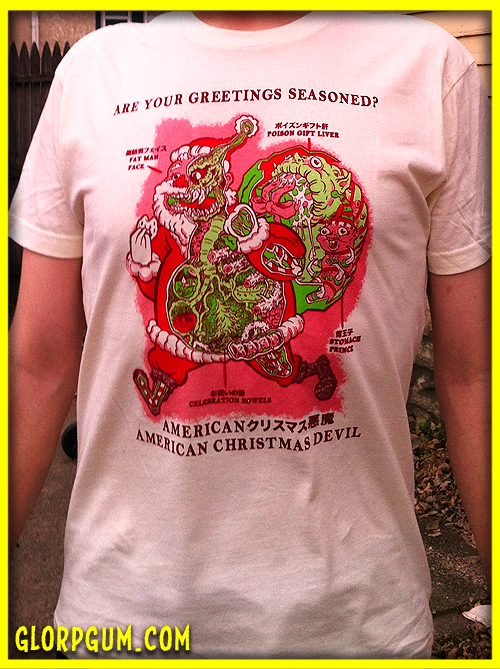 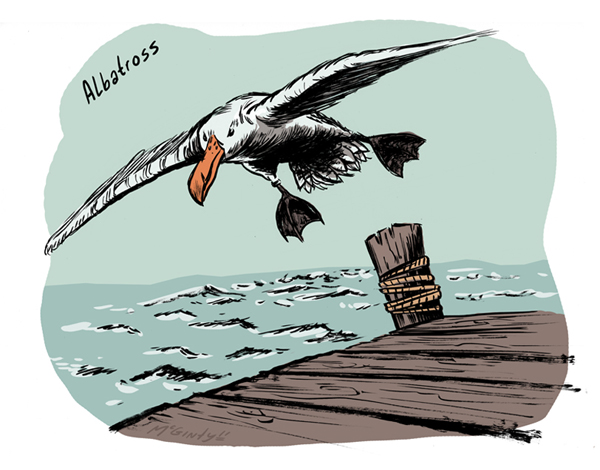